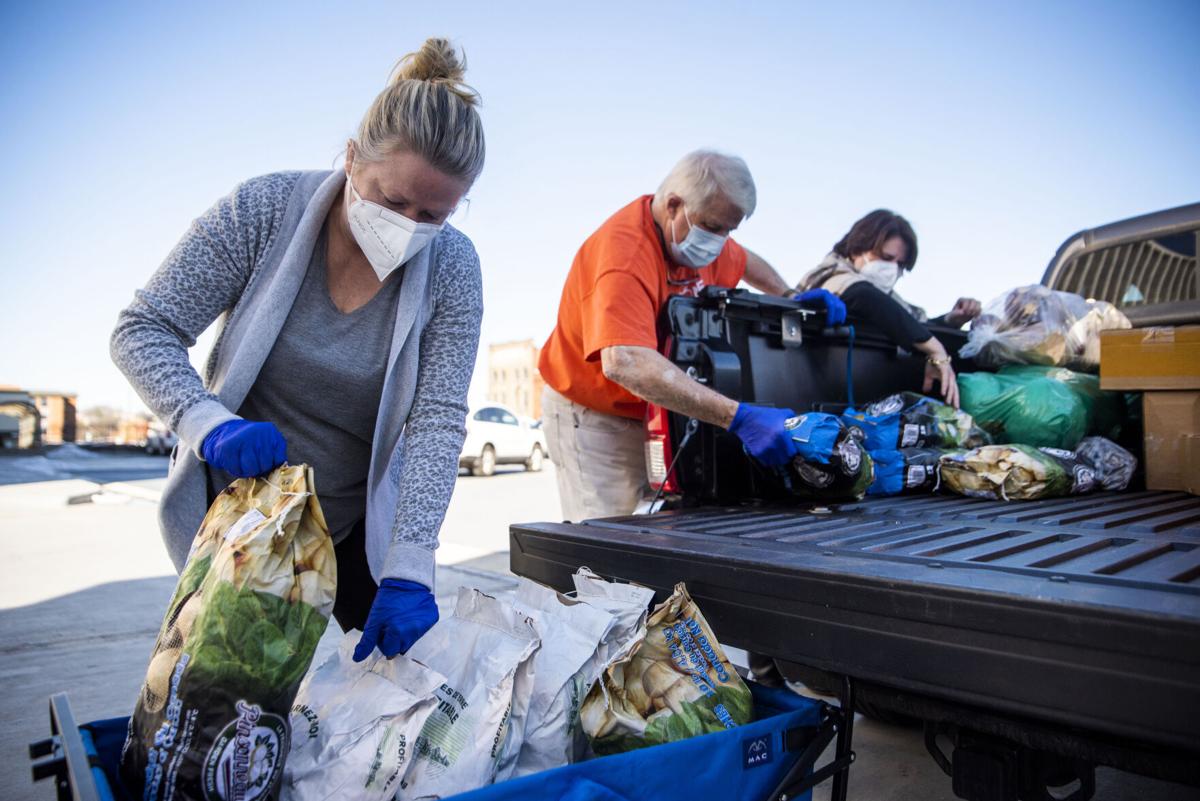 Christy Sale, patient services coordinator (from left); Jay Spencer, with the Blue Ridge Food Bank; and Ula Kauppi, director of development; unload fresh produce and foods from Spencer’s truck for the food pharmacy at the Free Clinic of Central Virginia in downtown Lynchburg on Tuesday, Jan. 11, 2022. 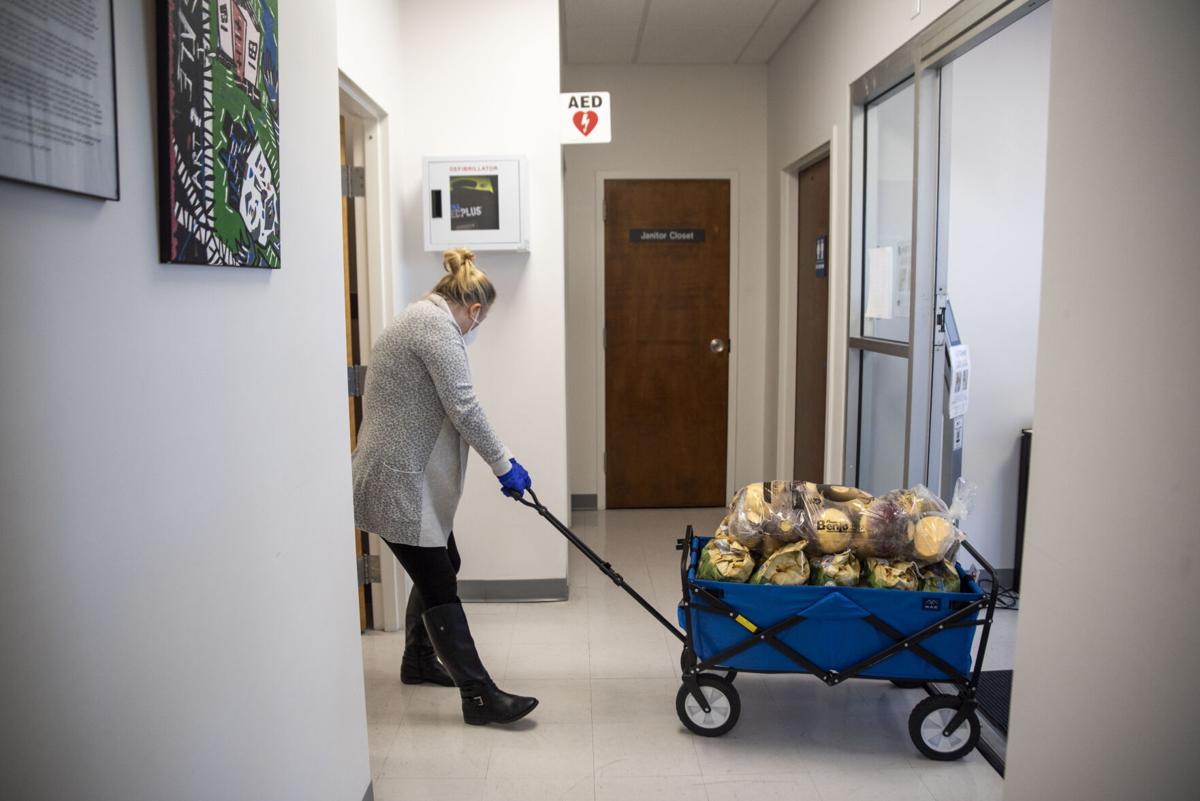 Christy Sale, patient services coordinator, hauls in a wagon full of fresh produce for the food pharmacy at the Free Clinic of Central Virginia in downtown Lynchburg on Tuesday, Jan. 11, 2022. 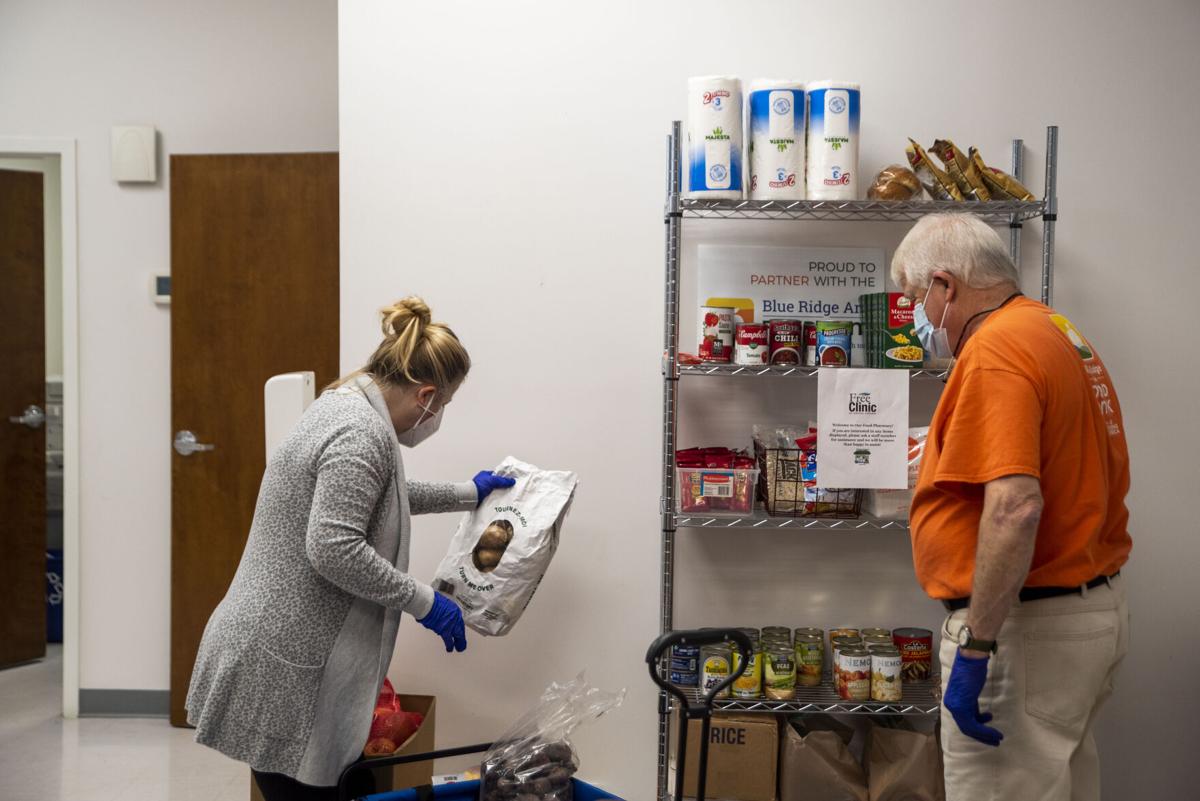 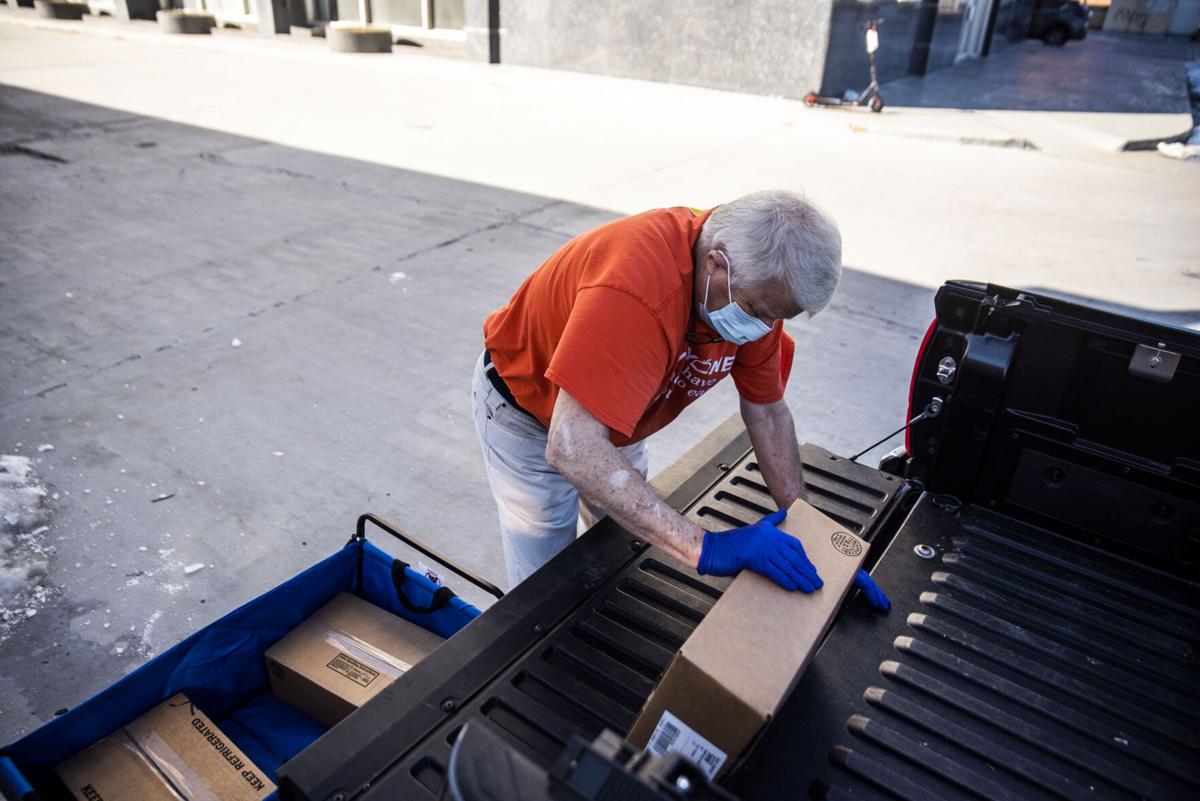 Jay Spencer, with the Blue Ridge Food Bank, unloads food from the bed of his truck for the food pharmacy at the Free Clinic of Central Virginia in downtown Lynchburg on Tuesday, Jan. 11, 2022. 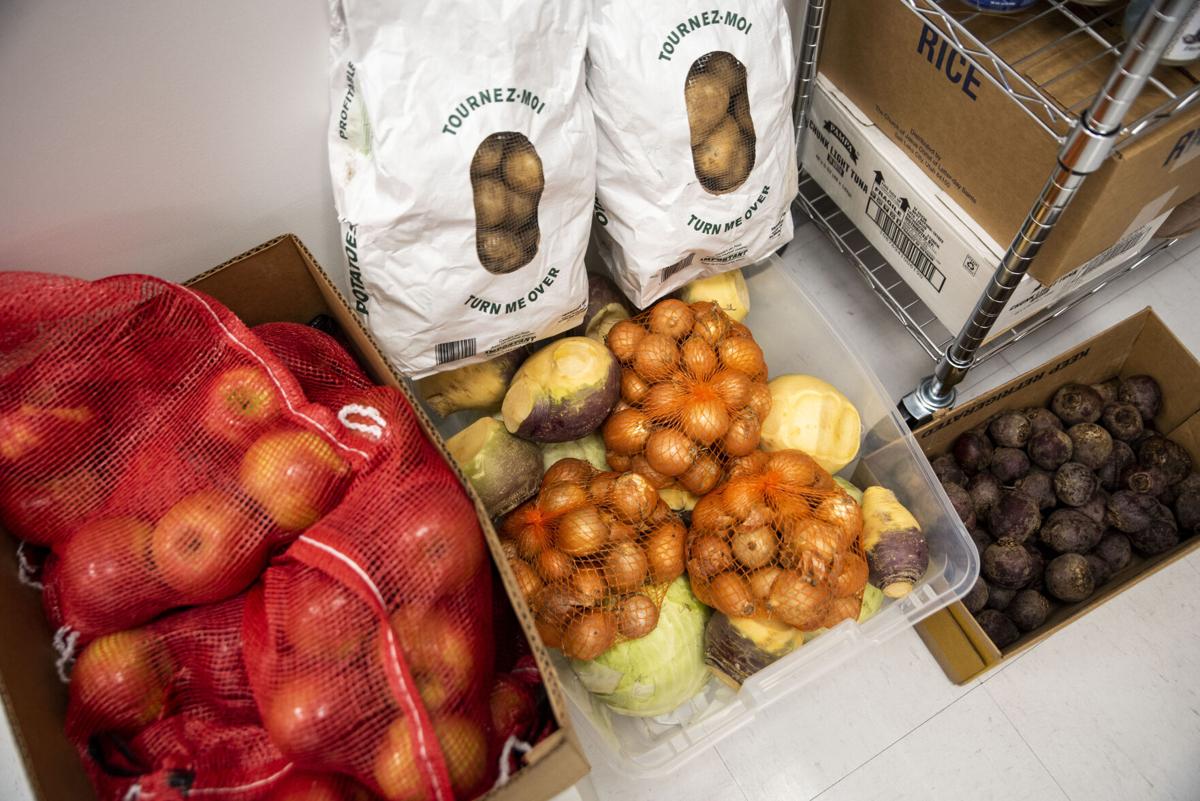 Fresh produce including beets, potatoes, apples and rutabaga is stocked in the food pharmacy at the Free Clinic of Central Virginia in downtown Lynchburg on Tuesday, Jan. 11, 2022. 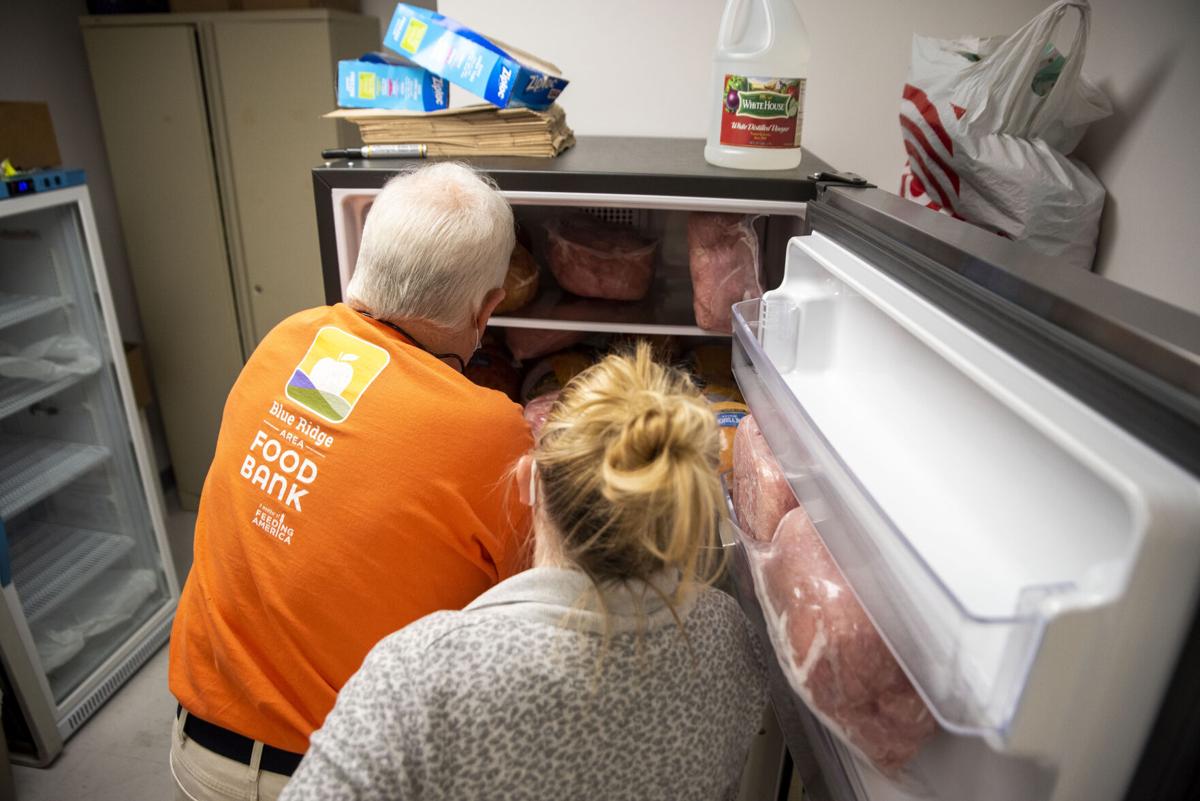 Jay Spencer, with the Blue Ridge Food Bank, and Christy Sale, patient services coordinator, stock frozen turkeys and hams in the food pharmacy at the Free Clinic of Central Virginia in downtown Lynchburg on Tuesday, Jan. 11, 2022. 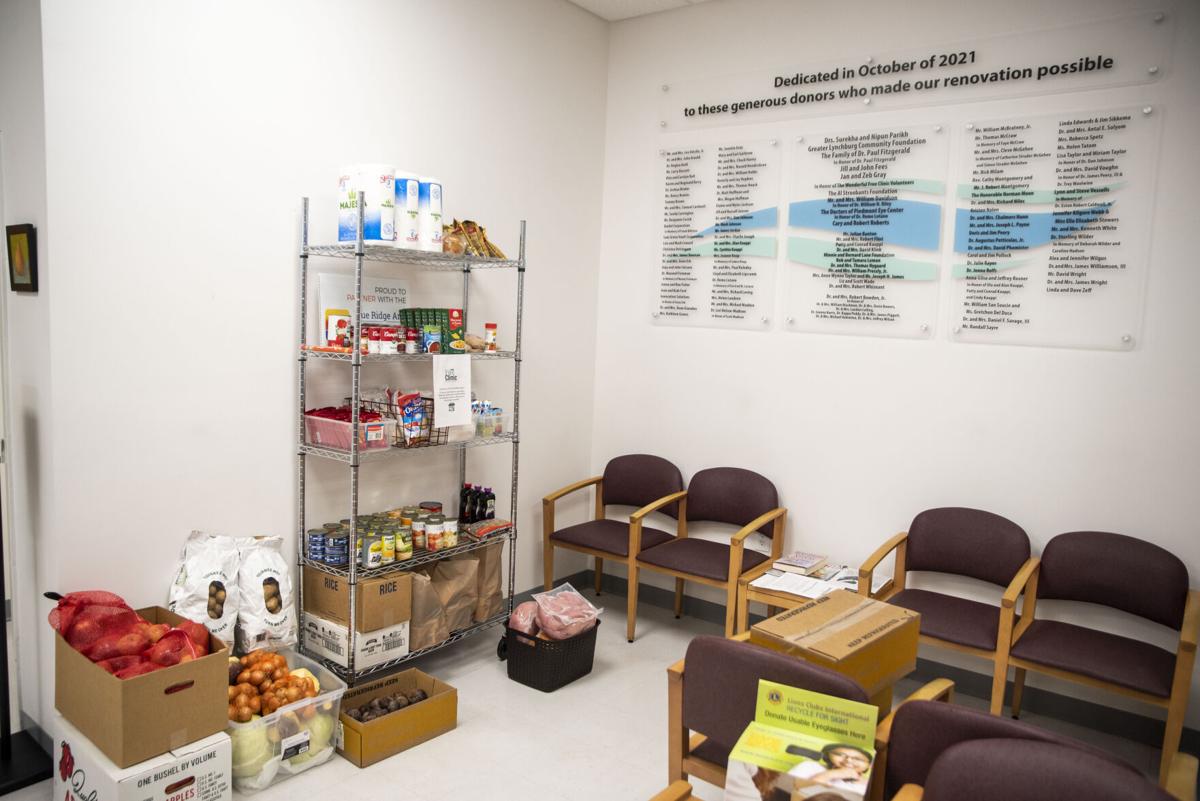 The food pharmacy in the waiting room at the Free Clinic of Central Virginia in downtown Lynchburg on Tuesday, Jan. 11, 2022. 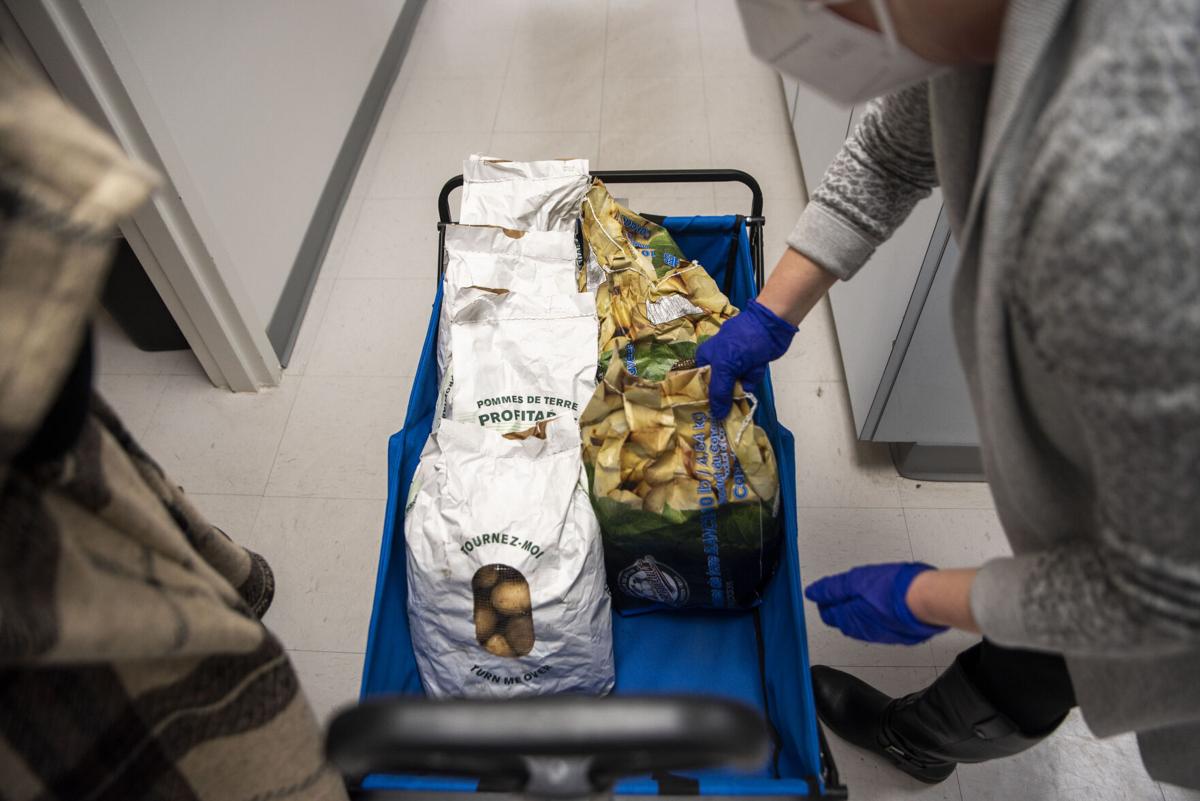 Christy Sale, patient services coordinator, unloads a wagon full of fresh produce for the food pharmacy at the Free Clinic of Central Virginia in downtown Lynchburg on Tuesday, Jan. 11, 2022. 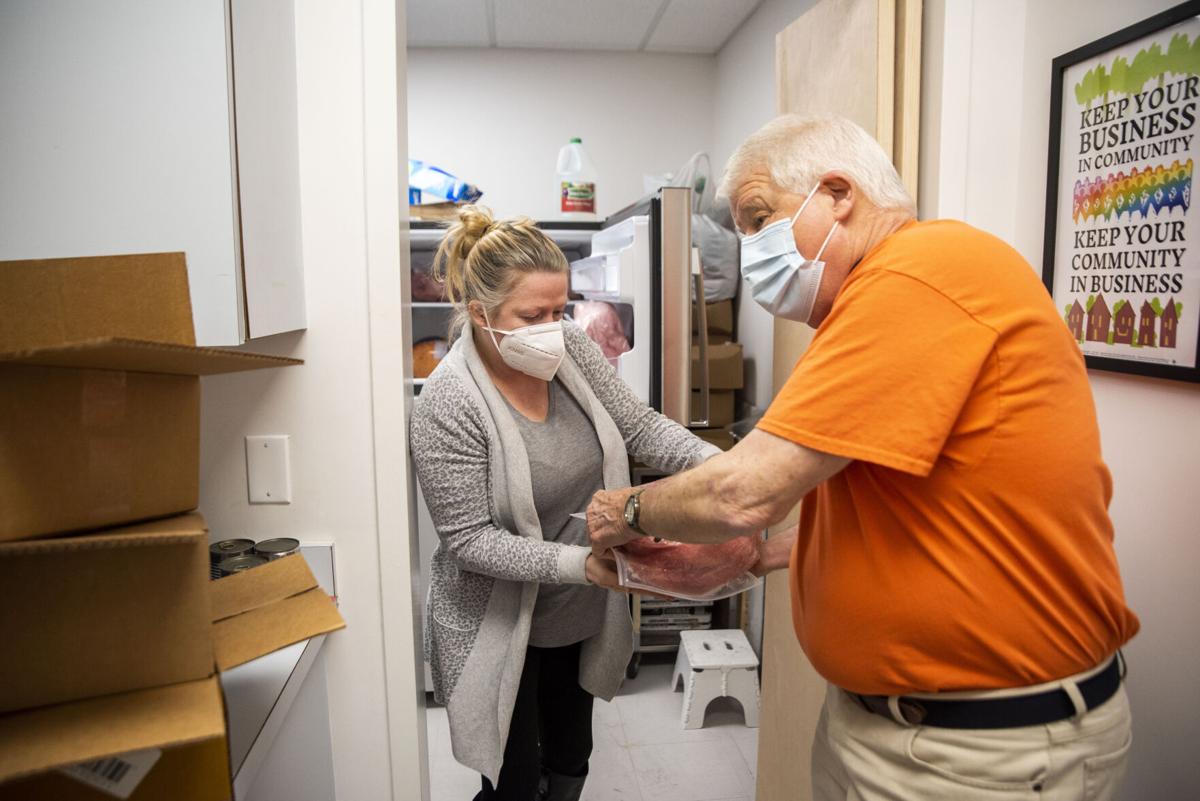 The Free Clinic of Central Virginia’s Food Pharmacy Store launched in July 2017 after Sante Perez-Morris, patient navigation manager at the free clinic, wanted to start doing more for patients being seen at the clinic.

“With our clientele of patients that come in and just knowing that their income and even with food stamps, it was just not enough,” she said.

Originally, volunteers and different churches would donate food items and the clinic would hold on to them until the holidays to give out. Perez-Morris felt there had to be a better way to serve their population on a daily basis.

The staff began chipping in so they could build a big enough pantry that would have a presence at the clinic and patients would start noticing it.

“So it started with staff and volunteers that were just bringing in things from their own cupboard, and staff took money out of their pay periods to buy items, and then they started bringing in hygiene items from there and it just grew,” she said. “And then one day we were like, ‘You know what, we could take this even bigger; we can take it even further.’”

The Free Clinic went to the Blue Ridge Area Food Bank and set up a meeting. Now, nearly five years later, it picks up anywhere between 800 to 2,400 pounds of food weekly from partner agency BRAFB, which in turn, is given for free to anyone in need who comes into the clinic.

The Free Clinic of Central Virginia, at 1016 Main St., provides a full array of services including medical, dental and behavioral health care. It provides care to people who are uninsured or underinsured, which means their insurance may not cover some services they need.

Ula Kauppi, director of development, said most patients are considered low- to middle-income if they fall under 250% of the federal poverty level.

“We treat about 4,000 patients a year and statistics tell us that there’s about 37,000 people in our area who are in the same situation. So we’re always trying to reach more people to let them know that we’re here and we can help them, and if we can’t help them, we can find somebody who can,” she said.

Many patients don’t even realize they qualify for Medicaid, so staff can help set them up.

Kauppi added many patients don’t live near grocery stores and don’t have access to fresh produce.

“So they’ve been really excited about heads of cabbage and bags of potatoes, and you can’t get that in the convenience stores,” she said.

Christy Sale, patient services coordinator, orders from the BRAFB twice per week sometimes, and checks the website daily to see what items are new.

“We try to get the fresh produce every week and everything else we try to stockpile but I would say typically once a week we have a pickup from the food bank,” she said. “Literally we’ve gone and we’ve had three vehicles worth of food stocked to the top.”

When patients come in and fill out paperwork before their appointment, Sale takes that opportunity to let them know about the food and ask if they need anything to take home.

Even though it’s mostly patients who use the “store,” Sale said it’s open for anyone in need.

The Food Pharmacy Store, as staff has named it, has become a voluntary task of even non-administrative workers at the clinic.

Now as a designated food bank location, Perez-Morris hopes more people in need will come to the clinic to take advantage of the free groceries.

“We tell patients to please share with neighbors or family members because they can come any time, five days a week to get food,” she said. “We know that there’s a need and we have the resources here and we would love for them to utilize it so we can assist with grocery needs just to fill in the gap, even if it’s just for a few days to hold you over until you get paid again or until your food stamps kick in or whatever your circumstances may be at that time.”

Sale started creating a menu to put in grocery bags so people would know what they could use the ingredients to make at home.

In 2021, the clinic spent $2,600 at BRAFB on food for the store. Thanks to donations raised from the community on Giving Tuesday, the clinic was able to raise $2,300 to purchase a stainless steel refrigerator and industrial shelving to house more produce, meats and other items.

“I literally never thought we’d get to the point where we’d have refrigerators,” Perez-Morris said.

Up until that point, the clinic could never accept anything other than nonperishable items as they had nowhere to keep it fresh.

Raven Younger, patient care coordinator, said the food pharmacy benefits patients because they are able to receive medical services as well as some groceries for their families.

“They have access to resources that they didn’t even know we offered,” she said. “They have their medical or dental appointment and then they’re able to leave with items to make a whole meal for their family. Even if it just holds them over for a few days or for the holidays, we’re happy we’re able to help.”

Perez-Morris hopes one day the clinic can transform the entire basement into the Food Pharmacy Store, but until then, she just smiles anytime someone walks away with a food bag.

“I honestly I feel so good,” she said. “I just I smile every time I see something happening in there. I never could have imagined that it would grow to be this big. We know that the need is there, but just having that feeling of knowing that you’re helping someone else, it’s a great feeling.”

Get the latest local business news delivered FREE to your inbox weekly.